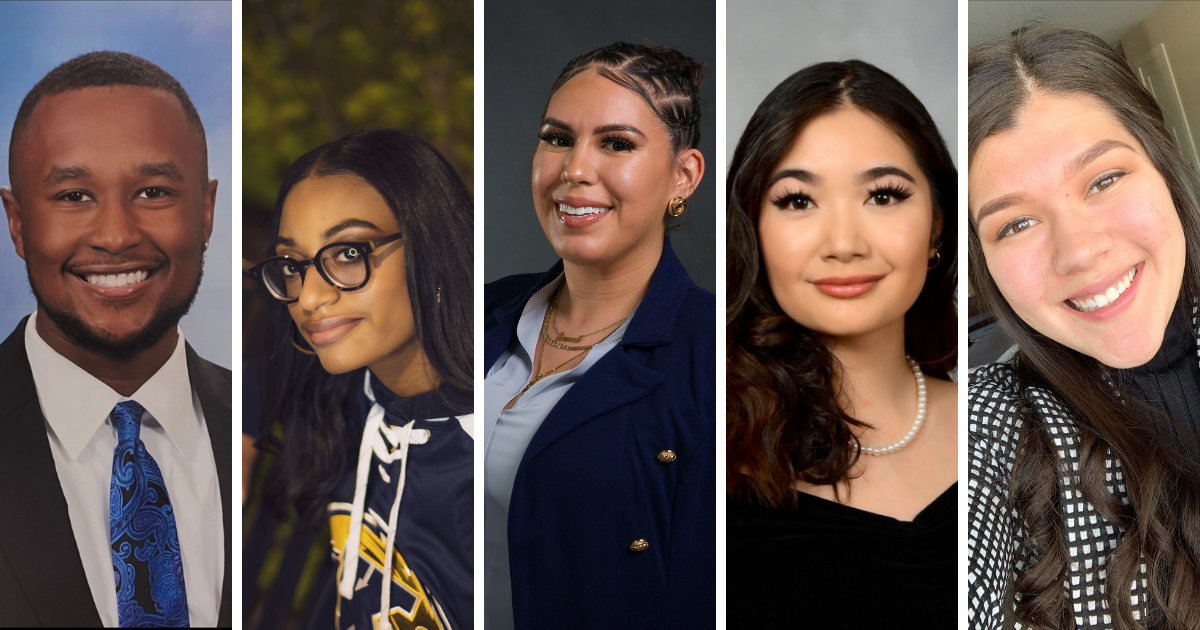 Classes have been in session since August for most of this year’s Diversity Dental Student Scholarship recipients, and they’re already practicing hand skills, convening study groups and applying lecture knowledge to dental typodonts.

The DDF spoke to each student to learn a little more about their journeys to dental school—and what it’s like now that they’re there. 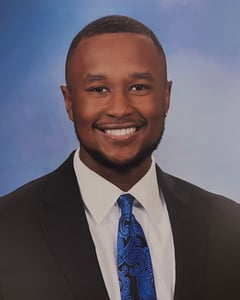 In high school, James Bennett III was in a traumatic car accident, which chipped one of his teeth (among other things). It felt like a big deal—and it was—but his dentist fixed it in an hour, making it look brand new. “The dentist played an integral role in helping me process trauma, because when I looked in the mirror, I didn’t see the accident anymore,” Bennett said. “She really changed my life.”

His senior year, he asked if he could shadow her in her office—and everything fell into place. “I fell in love. I always knew I wanted to be in health care, but it took so long to figure out what field I wanted to go into,” Bennett said. Dentistry encapsulated everything he wanted in a profession: the ability to work with his hands, be his own boss, make social connections with patients and play an important role in rebuilding someone’s confidence (and health).

As he moved forward in his studies, he also wanted to leave something behind.

“I always ask myself, how do I leave a legacy? How do I do more? I really want to help increase the presence of minorities in the field. You have a diverse array of patients, and the dentists who care for them should be reflective of that population.” To create a supportive, welcoming space for more underrepresented dental students, he founded a chapter of the Undergraduate Student National Dental Association at Michigan State University. The club is now in its third year, and he plans to go back this November to talk to them about opportunities in dentistry and diversity, equity and inclusion.

Dental school has been intense. “You get thrown into the fire right away,” Bennett said. “It’s all new! No one in my family has done anything in dentistry or medicine. I call home and my parents encourage me, but they’ve never done it before so they can’t give me advice. I’m figuring it out. I ask myself: What can I do today to be better than I was yesterday? And if I can go to bed saying that I became more proficient in an area that I previously struggled in, then that is a victory. During my time here in school, I have learned to take joy in the little things and to remain positive throughout your good days and your bad days. As long as I'm progressing, I know that I can do anything.” 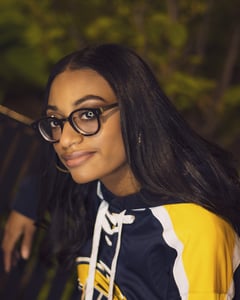 “When I was younger, I went to school with my mother who was a special education teaching assistant. There was another woman working there who used to brag about her son becoming a doctor, and I never thought much of it until years later, when I was in high school. My mom and I googled him, and it turned out that he had become an orthodontist—and, because I needed braces, I became his patient,” Charmaine Bowden-Hancock said.

As part of the orthodontic work, she had a few baby teeth pulled and thought the process was fascinating. “You know, I was on laughing gas, I was having a great time, and it was painless. I got to keep the teeth, too.” It didn’t hurt that her orthodontist looked like her, either. “Seeing another African American as a dentist confirmed it was all possible for me.”

She says that finally being in dental school, as challenging as it is, is a relief. Bowden-Hancock took a gap year between undergrad and dental school to study for the Dental Admission Test, or DAT. It’s a test that dental schools use as a tool to assess someone’s potential for success but can be an expensive gatekeeping measure to some. “I took it twice, and it was mentally draining,” said Bowden-Hancock. Her goal is to one day start a professional mentorship program, whether she’s at a Federally Qualified Health Center or her own private practice, that helps prospective dental students pay for the DAT or any other materials they need to succeed.

“So far, my favorite part of dental school is the people. Everyone is so helpful. Faculty, the other dental students, upperclassmen—we’re all in this together, and no one is out to get you.” She says that everyone shares study resources—anything to make the journey easier. Her family is a part of that, too. Born and raised in Cleveland, going to school at Case Western Reserve University means Bowden-Hancock can stay close to her mom, dad, brother and dogs.

“Family is important to me. They all want to see me win.”

“I’m Hispanic, and I’m a first-generation college student,” said Diamanté Cabrera. She goes on to explain that her interest in dentistry started well before high school, initially because many of her family members didn’t smile. They were self-conscious because of how their teeth look, and she knew she wanted to—and could—change that.

“We [my community] didn’t have access to a lot of health care—medical or dental,” Cabrera said. “And dental isn’t prioritized. People are more likely to go to the doctor than the dentist, unless they have tooth pain. I want to help educate the public and bridge that gap in underserved communities.” She wants to do some of this public health dentistry education on TikTok, where she knows she'll be able to capture a wide variety of viewers.

Cabrera also appreciates that general dentistry allows you to see and do so many things. Initially, she had been interested in orthodontia, but eventually thought it might be too repetitive. “I’m a person who likes variety and different challenges. When I shadowed dentists, I really liked root canals because of all the intricate detail. I don’t want one, but I like to watch them.”

As a self-described kinesthetic learner, the hands-on aspect of dentistry is hugely appealing to her, and working with the typodonts and high-speed handpieces has been her favorite part of school. Getting there, however, was a challenge—and it’s partially why she has a master’s degree in biology.

“One of things I don’t always talk about is that it took me three tries to get into dental school,” Cabrera said. “I wasn’t always comfortable talking about it because of how disappointed I felt. But then I realized that people need to know that if you really want to do something, it doesn’t matter how many noes you get—you’ll work hard and find a way to get there.” 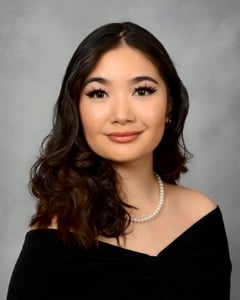 Sidney Li knew she wanted to be a dentist when she was a kid.

“My parents are refugees from China and Vietnam, so when they needed dental work, they brought me along as their translator, even though I wasn’t very good at it because I didn’t know dental terms,” said Li. Her parents initially had “a ton” of dental issues because they didn’t prioritize oral health—largely because they had other things to worry about. When they came to the United States, they were finally able to address those issues.

“Even though I didn’t have any major dental issues, when my parents and brother got care, I saw how impactful the dentist was. My parents’ lives changed—they smiled more,” Li said. The language barrier didn’t prevent the importance of good oral health from carrying over from the dental office to her parents. “They valued their teeth more afterward!”

Being a first-generation college student has been challenging, though. Li mentioned that because there’s no one in her family who’s been through college, never mind dental school, she can’t go to them for advice—even if she has their support. Fortunately, the Ohio State University College of Dentistry has a robust mentorship program for dental school students. First-year dental students are matched with a second-year (D2) dental student who can offer one-on-one assistance. The program hosts social events, study groups and even drilling practices.

“My mentor is a D2 student who is also a minority, so she has really useful perspective. I wouldn’t be as successful without this program,” Li said.

When asked about her future plans, Li brought the conversation back to high school, when she shadowed her dentist. Seeing him and his impact on her local community was huge, especially given the socioeconomic diversity of his patients. Often, the patients on the lower end of the socioeconomic scale faced real challenges when it came to good oral health, which convinced Li that she might want to work in an underserved area so that she can focus on access and education.

Being bilingual helps, too. Because she speaks English and Chinese, Li believes she can fill a crucial gap for patients with language barriers. “As the field of dentistry evolves, hopefully more people who were historically hesitant to go to dental school will be inspired to when they see people similar to themselves doing it,” Li said. 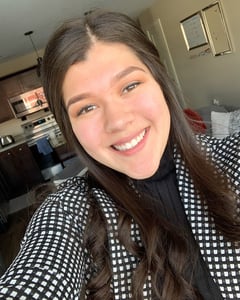 Going into high school, Lauren Perry always knew that she wanted a career in health care. A career exploration quiz helped focus her aspirations: two of her top three results were in dentistry.

By the time she was a freshman in college, she was shadowing a dentist. “There was just so much I loved about it. You get to combine art and science, and you work with your hands,” Perry said. “I also loved that you could build long-term relationships with clients while still having tons of flexibility and opportunity.”

Before starting dental school, Perry went to Guatemala on a mission trip, the goal of which was delivering dental care to communities in need. During her trip, she assisted with cleanings, performed fluoride treatments and sterilized instruments. “Everyone was so happy and grateful to be receiving care,” Perry said. She witnessed firsthand how limited access to dental care could create problems in Houghton Lake, her hometown, but the lack of care in rural Guatemala opened her eyes.

Shadowing and volunteering were foundational experiences for Perry, and they’ve informed her studies in dental school. Perry says that dental school has been busy but exciting, especially when it comes to applying her past knowledge and skills to new experiences. “I love being able to look back at things I saw while shadowing and connect them with what I am learning now.”

Scouting Goes Virtual
On a Mission
Supporting Seniors During the Pandemic
Foundation Provides Emergency Aid
Book Reaches Busy New Parents
Prioritizing Dental in a Pandemic
People with Disabilities Still Face Barriers Accessing Dental Care
Bringing Dental Care Directly to Kids Makes a Difference
Evolving the Dental Experience for the LGBTQ+ Community
Bridging the Medical-Dental Divide Through Integration
Mind and Mouth: Why the Conversation about Mental Health Should Include Oral Health
Grantmaking for Change in 2021
First Class of Diversity Dental Student Scholarships Announced
Training Providers to Deliver Better Dental Care to People with Disabilities
Nine Ways to Welcome the LGBTQ+ Community to Your Dental Practice
Good Oral Health Should be a Point of Pride
The Lifecycle of a From Drool to School Book
2021 Community Commitment Award Recipients Check In
Miles of Smiles Goes Back to School